RiseML simplifies running, monitoring, and scaling deep learning experiments on Kubernetes. Kubernetes is an open-source system for orchestrating and scheduling containerized workloads that was initiated by Google. RiseML supports all major deep learning frameworks such as Caffe, Tensorflow, Theano, and Torch.

Using RiseML, we can combine individual GPU servers as a single compute cluster so your team can better utilize it for sharing its resources for training machine learning models. This allows your team to focus on what really matters, namely deep learning research and not repetitive manual work, hardware setup headaches, or software configuration issues. With RiseML Clusters, you can:

The most advanced container orchestrator

Keep your data and code private

As a leading NVIDIA Elite Partner, Exxact Corporation works closely with the NVIDIA Tesla GPU team to ensure seamless factory development and support. We pride ourselves on providing value-added service standards unmatched by our competitors.

RiseML provides a simple yet powerful abstraction for machine learning engineers working on GPU infrastructure both in the cloud and on bare metal. ML engineers access RiseML via a command-line interface (CLI) that hides the working details of the underlying cluster hardware which introduces a new layer tightly coupled to machine learning concepts. Researchers using RiseML think in terms of experiments that train a model. Under the hood, RiseML takes care of executing these experiments on the infrastructure in a robust manner, including deciding on which nodes specific parts of an experiment are executed. 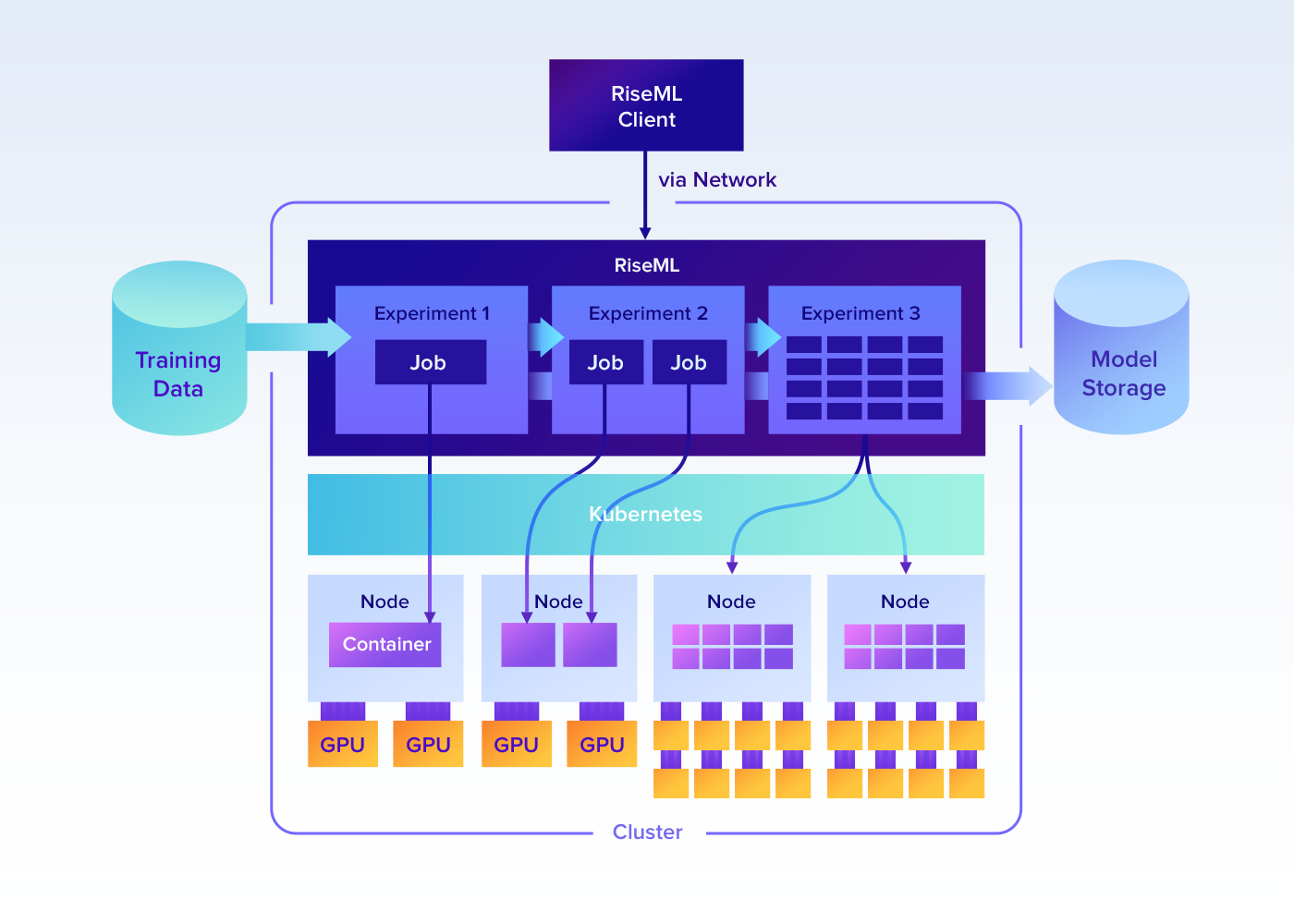 An Exxact RiseML Cluster consists of a hardware layer with a number of nodes and GPUs, a Kubernetes layer that orchestrates machine learning jobs and a RiseML layer that manages experiments and turns them into Kubernetes jobs. Each Exxact RiseML Cluster contains storage systems configured to meet the specific requirements and challenges of varied types of training and model data.

The RiseML layer consists of multiple components which also run on top of Kubernetes next to all machine learning jobs. For example, RiseML takes care of versioning, gathering logs, and tracking the state of each experiment. This is the core function of RiseML. On top RiseML provides a REST API that can be either accessed programmatically or via the RiseML client.

All experiments on the RiseML cluster run in containers, lightweight "virtual machines", running Linux. This enables installing project dependencies that don't interfere with each other. For example, it is possible to run different Linux distributions on the same cluster or even the same node at the same time. Each container is started from an image. The image contains the container's filesystem, including all system libraries, your machine learning code, and other dependencies you need to run your code.